Zack Helsel has had a challenging path throughout his entire baseball career. He was part of the uber talented 2015 grad year class at US Elite that had superstars like Kyle Datres (UNC/Rockies), Travis Blankenhorn (Twins), Brett Kinneman (NC State/Pirates) and Niko Hulsizer (Morehead State/Dodgers). While those players got the well deserved attention and accolades, Zack was the classic late bloomer. As a sophomore in high school he was 5’10’/145. As a high school outfielder, he wasn’t fast enough, nor did he hit for average or power to get any looks from D1 coaches. As a RHP he was well below D1 standards (75-76 mph). He was noticeably behind the talented players in his class. Then, he fell even further behind.

In the first tournament of the summer following his sophomore year of high school he collided with a teammate and was knocked out cold. When he awoke in the Roanoke hospital he was told he had a concussion, his jaw was broken, his collar bone was broken, he lost two teeth and he had 7 stitches in his lip. The doctor actually found a piece of his tooth embedded in his cheek. “I was pretty beat up, said Helsel. At first it didn’t dawn on me at how far behind my accident would put me. All summer long I just watched my teammates play and allowed my body to heal. My jaw was wired shut and my arm was in a sling. I wasn’t able to play again until the end of the fall of my junior year”. 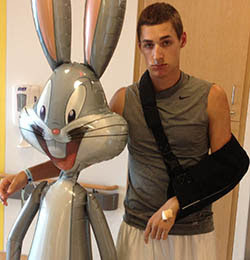 Because my jaw was wired shut, I lost a lot of weight. At one point I was 135 lbs. When I was finally able to start eating real food again, and lifting weights I realized I had a lot of catching up to do. It was like a light bulb went on in my head. I felt like I was on a mission. I had no time to waste. I started working out like a maniac and pounding weight gain shakes and protein. I was consuming over 5,000 calories a day. I gained 40 lbs in one year. Everything changed for me. My confidence soared. I looked good in the mirror for the first time in my life, I went from mid 70’s velocity to low 80’s by the summer after my junior year. I started getting a few looks from D1 programs. Then, Liberty offered me a scholarship and I committed on the spot. It was my dream school”. 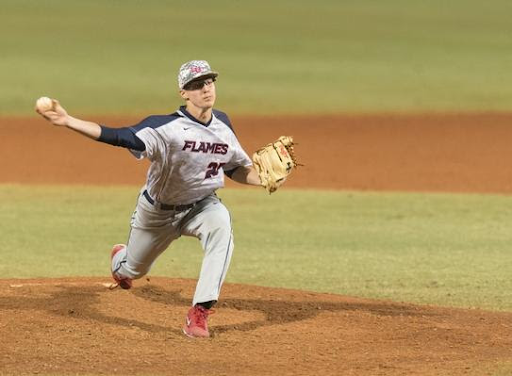 After a decent freshman season at Liberty, in which Helsel showed some promise, he still had some command issues. At that point things began going the wrong direction. By April of his sophomore season, Helsel still hadn’t pitched in a game at Liberty. At the encouragement of his dad (US Elite’s Director, Mark Helsel) Zack set up a meeting with Liberty Head Coach, Scott Jackson. “The meeting was very amicable, said Zack. But, it was clear from what Coach Jackson and Coach Gaines told me; I would not have a scholarship the following year and my role at Liberty was very much in question. They actually told me the best move for me was to transfer to a Junior College and get back on track. I agreed. The following fall I was enrolled at Miami Dade JC”. 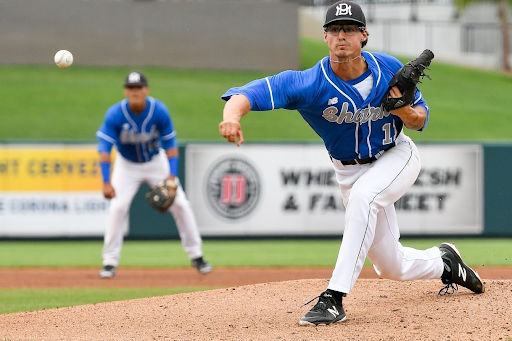 Helsel made the most of his time at Miami Dade and improved a great deal. “That was a good move for me. I just needed to relax and learn how to pitch. I felt like the pressure was off and I focused on development. I worked a lot of things out”. College coaches noticed. Helsel had gotten his confidence back, his command back and his velo jumped from the mid 80’s to upper 80’s. That was good enough to impress the coaches at UCF and they offered him a scholarship. By the fall of 2018 Helsel was enrolled in his third school in 4 years.

Helsel had a stellar fall at UCF and earned the respect of his teammates and coaches. He put up great numbers and felt the best he had ever felt. “I learned to just focus on who I needed to be. I stopped trying to be all things to all people. Sometimes you can care too much about what others think”, said Helsel.

By spring, Helsel was ready to have a breakout season as a RS Jr at UCF. The UCF coaches had made it clear that he would play a big role out of the pen. And things started fantastic. In 3 stellar outings he pitched well and didn’t give up a hit. He also saw his velo top at 92. For a side-armer that’s MLB velocity. But, it was short lived. Helsel was on the mound, pitching against Auburn, when he felt a searing pain in his right elbow. He called time out and literally took himself out of the game. He knew something was very wrong. An MRI a few days later confirmed the worst. Helsel would need to have Tommy John surgery and miss the entire rest of the season.

“Obviously, that is not what you want to hear, said Helsel. But, maybe because I’ve been overcoming adversity my entire career, I really didn’t have that down feeling. I literally just wanted to get the surgery done as soon as possible so I could get going with rehab and get ready for next year”. 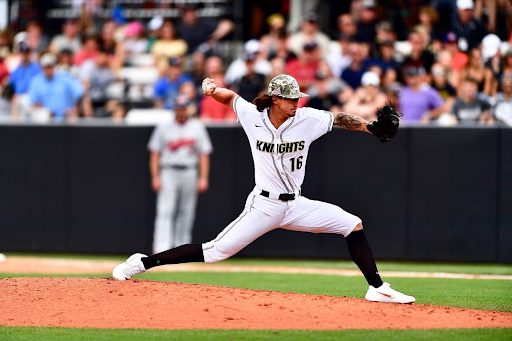 Helsel had the surgery on March 7th. He did get some good news after surgery. “They told me my UCL was loose it didn’t need a full reconstruction. So, my recovery time is shorter and I expect to be 100% by next year”. 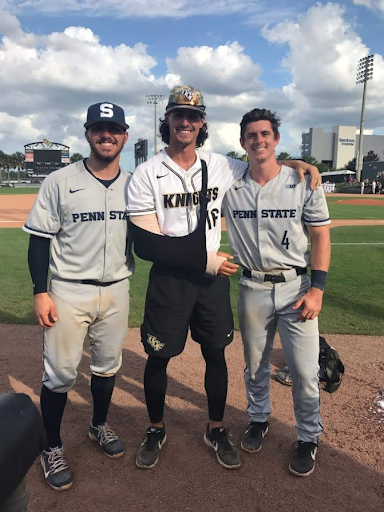 In looking back over Helsel’s career it's easy to notice one obvious trait he embraces, and that is the ability to overcome adversity. “I think if you study successful people you will find that to be a common denominator. We hear about their success, but when you peel the onion back you’ll find that nearly all of these successful people had lots of obstacles along the way. Many people have the same obstacles, but those that achieve a high level found a way to overcome them. That’s the difference and I plan to be one of them”.